A new feature-length documentary film from Montana PBS about Montana’s freestyle skiing legacy will premiere on Montana PBS at 6 p.m. Sunday, Jan. 30. It will be accompanied by free screenings at the Emerson Center’s Crawford Theater in Bozeman on Jan. 26 and at the Wilma Theater in Missoula on Jan. 27.

“Mavericks” follows the careers of a number of Montana freestyle skiers, including Missoula’s Olympic gold medal winner Eric Bergoust, Butte’s Bryon Wilson and Whitefish’s Maggie Voisin. Using visuals from international competitions, archival footage and original cinematography, the film captures “the struggles, victories, unsurpassed work ethic and unbreakable spirit of some of the state’s most renowned athletes in a sport where mere seconds determine the outcome of a career,” according to Kelly Gorham, producer and writer. Scott Sterling, director of production at Montana PBS, is the film’s producer, director and editor; and Aaron Pruitt, Montana PBS director and general manager, is executive producer.

The filmmakers call Montana freestyle skiers the mavericks of the sport, with multiple freestyle skiers from throughout the state getting their start on homemade jumps and then going on to impressive careers. Freestyle skiing is a sport comprising aerials, moguls, half-pipe, slopestyle and more, with skiers often performing aerial flips and spins. 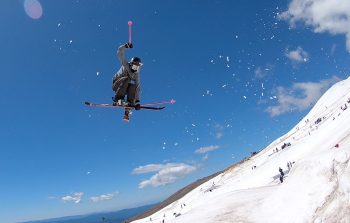 “Opportunities to make a film like ‘Mavericks’ don’t come along often,” Sterling said. “This film was as exciting to produce as it is to watch, and I’m thrilled to bring the incredible legacy of freestyle skiing in Montana to the forefront while celebrating our local athletes and inspiring future generations.”

During the 1998 Olympics in Nagano, Japan, Bergoust won an Olympic gold medal and set a world record for aerials. A dozen years later, Wilson took home bronze for his mogul performance at the Olympics held in Vancouver, Canada. Voisin followed with an X Games gold medal in Colorado in 2018 and a second X Games gold medal in Norway in 2020. She also competed in the 2018 Winter Olympics in Pyeongchang, South Korea, where she finished fourth in the slopestyle competition, and has earned a spot on the U.S. Olympic Freestyle Ski Team for the 2022 Winter Olympics, which are set to begin next month in Beijing. The film also follows the careers of Olympians Heather McPhie of Bozeman, Darian Stevens of Missoula and Bradley Wilson of Butte.

Gorham – a former competitive freestyle skier who, decades ago, trained and competed with many of the individuals featured in the film – began crafting the “Mavericks” story more than 10 years ago. Crews began filming “Mavericks” in 2018, capturing footage of athletes performing at several major events, including the 2018 FIS VISA Freestyle International in Deer Valley, Utah, and the 2019 FIS World Championships in Deer Valley and Park City, Utah. Other filming locations have included Missoula, Butte, Bozeman and Whitefish. Gorham said he and Sterling also sorted through hundreds of hours of archival footage to find the right clips to use in the roughly 57-minute film.

But even though it features impressive skiing feats in beautiful settings, Gorham said the film isn’t what many would consider to be a traditional ski film.

“I feel like we’re breaking new ground,” he said. “We’re focusing on the history (of the sport), as well as current modern freestyle. We also talk about the darker side of freestyle skiing: injuries, failures, self-doubt.”

Gorham, now 49, said his own experience and reality as a freestyle skier may be why he was so intent on making sure the film addressed injuries and more.

Gorham, who grew up in Missoula, competed in freestyle skiing from 1986 to 1992. He achieved success regionally, including competing at the 1989 U.S. Junior National championships held in Telluride, Colorado. In 1991, he made the U.S. Junior ski team. He also qualified for the Junior World Championships that were held that year in France, but he wasn’t able to compete due to injury. He spent the next summer in Oregon training at Mt. Hood and expected to continue competing at a high level. But a crash resulted in a bone graft surgery, ending his competitive skiing career.

Making a film featuring many of his closest friends and skiing teammates was challenging in some ways, Gorham said.

“So many of these people (in the film) I’ve known for so long; I felt extra pressure to write a story that did the history and the people justice,” he said.

Still, his deep understanding of the sport and friendship with many of the people featured in “Mavericks” likely benefitted the film, Gorham added.

“At the same time, I’m not an outsider, and it was very easy to talk to them,” Gorham said. “I had a comfort that I don’t know that I would have had otherwise to ask them the more difficult questions about things like injury and the mental side of the sport.”

At its heart, Sterling – who grew up on the slopes in Aspen, Colorado, and also has a passion for skiing – said the film is a story about hard-working people who love what they do.

“These people happen to be skiers, and they happen to be doing really cool stuff with their bodies and really amazing tricks,” he said. “But as far as I’m concerned, they could be bike riders, chess players or anything else. The point is to tell their story, which is a Montana story.

“We made this film to appeal to everybody,” he added. “We want it to appeal to a farmer in Broadus just as much as someone who is a (competitive freestyle skier).”

Both Sterling and Gorham agreed that the film benefitted from what they called a unique collaboration.

“This project likely wouldn’t have happened, at least in this way, without Kelly’s background and knowledge of the subject, and without the experience, assets and desire on the part of Montana PBS to tell the story,” Sterling said.

“This was a challenging production, and it needed someone with Scott’s experience to carry it across the finish line,” Gorham said.

Gorham added he is thrilled with the final product.

“If I had a million dollars and another year to work on it, there’s nothing I would change,” he said. “I feel like it’s the best film we could possibly make.”

Both Gorham and Sterling are graduates of the MSU School of Film and Photography. In addition to his work on the film, Gorham serves as director of visual media for MSU’s communications office. Sterling is an accomplished filmmaker and has received numerous professional recognitions, including 11 Northwest Emmy® Awards. Perhaps his most successful film so far has been “The Violin Alone,” which won six Northwest Regional Emmy Awards in 2018. He also serves as director and producer of Montana PBS’s award-winning series “11th & Grant with Eric Funk.”

The Bozeman premiere of “Mavericks” on Jan. 26 is free and open to the public. Doors to the Emerson Center’s Crawford Theater will open at 6:30 p.m., with the film beginning at 7 p.m. Tickets are not required, but those attending are advised to arrive early to get a seat. Door prizes will be offered to those in attendance, with giveaway items courtesy of Girls Outdoors.

On the following night, Jan. 27, the film will premiere in Missoula at the Wilma. Doors to that free screening will open at 6:30 p.m., with the film beginning at 7 p.m. Tickets are not required, but those attending are advised to arrive early to get a seat.

More information about the film is available at montanapbs.org/programs/mavericks/. •