The annual Bridger Raptor Festival returns to Southwest Montana for its return event, Friday through Sunday, October 1st–3rd. Events are FREE and open to the public. Raptor Fest centers on the largest known Golden Eagle migration in the United States, with a local raptor migration count taking place every fall at the top of the Ridge.

The weekend festival will be preceded by a kick-off event featuring a screening of the documentary Scouting 13 Million Sky Raptors, followed by a discussion with wildlife biologist Wes Larson. The event will also include a live bird presentation, “45 Years of Counting Migrating Raptors in the Western U.S.,” by keynote speaker Steve Hoffman. The evening will take place at Downtown Bozeman’s Ellen Theatre on Friday evening, Oct. 1st beginning at 7pm. Sustained by community support, there is no charge for admission. 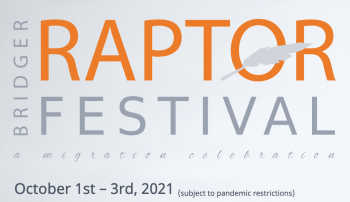 Wes Larson is on a mission across the United States to find the next generation of conservationists. Scouting highlights efforts by a dedicated team of conservationists on a remote mountain top in Eastern Nevada, who have been keeping watch for over 30 years. Their mission? To count and record every single raptor and bird of prey that flies past to keep track of their populations.

Founder of HawkWatch International, Steve Hoffman will chronicle efforts to develop an expansive raptor migration monitoring network in the western U.S., which has yielded important scientific information about the health and long-term trends of more than a dozen raptor species that migrate through western North America. He will summarize key findings from these long-term raptor monitoring efforts, with a special focus on the results of 29 consecutive seasons of scientific raptor counts conducted each fall along the crest of the Bridger Mountains, above Bridger Bowl Ski Area.

Following the Friday night presentation, Raptor Festival activities will include two days of live bird talks, nature walks, educational programs, and entertainment for people of all ages. A highlight every year, Saturday will feature an Oktober Fest event from 3–6pm with live music, food, and beer in the Jim Bridger Lodge. Get the full schedule of weekend events at www.bridgerraptorfest.org. •